Guatemala is located between the South and North America. Adjacent to Mexico on the north, Honduras and El Salvador on the southeast, Guatemala borders Belize on the northeast. Caribbean Sea lies to the east and the Pacific to the south, and the coastal line is 400 km. The territory covers an area of approximately 108,890 square km (about three times the size of Taiwan). The topographical features of the country are marked by highland volcano (Volcán Tajumulco being the highest ridge in Central America in an altitude of 4210 feet), lowland tropical forest, volcanic sandy plain along the Pacific coast, and virgin land along coastal line of the Caribbean. The major mountains of Guatemala run from northwest to southeast, and Sierra Madre one with the highest altitude. Lakes and ponds are everywhere in these mountainous, such as Lake Izabal and Lake Atitlan. Besides, Tikal and Uaxactún, all which are homes to historical Maya relics. Furthermore, Guatemala City, La Antigua, Guatemala, Solola, and Chichicastenango are plateau cities. In Guatemala, the plateau areas brim with strong Indian styles, and its national characteristics are well reflected in local handicraft works and religious traditions.

In 1543 during the colonial period, Antigua Guatemala was once the capital for the entire Central America, as it was a home to the Spanish Viceroy House. Buildings of Spanish style can be seen everywhere in the city where tourists can have the opportunity to see the typical checkerboard streets, baroque churches, city concourses, and noble mansions, leaving people a lot to the imaginative of the charms in its prime. The destruction of City of Antigua in the wale of a deadly earthquake hit in Guatemala in 1773, the government of Guatemala relocated the capital to Guatemala City in 1776. The City of Antigua Guatemala is about 45km to the west of Guatemala City. Though many ancient relics were ruined during the massive earthquake, some of the buildings such as churches and monasteries are still given much attention till date. The old city was recognized as the capital of world heritage in 1979. Rich tourism resources, political and economic cultures, religious characteristics, and comfortable hotel facilities at reasonable price the city enjoys are the major reasons to attract volumes of tourists. 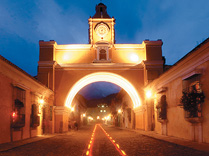 More than the capital of Guatemala, Guatemala City is the largest city in Central America. The city features its city styles blended with the ones from the colonial period, republic period, and that of the modern era. Built 1500 meters above sea level in the highlands of Guatemala, Guatemala City is surrounded by clusters of volcano. The city enjoys a pleasant climate with an average temperature around 17-20˚C.


Within Guatemala City, the Municipal Center Building is a home to the city hall, high court, bureau of tourism, and other important institutes. Central Park, Constitution Square, and national library are located at the core area with the most historic value of the city. For tourists who enjoy soaking in nature, the botanical garden would be their best choice in which there are approximately 1,200 kinds of plants species highlighting its ecological diversity that serves with research and educational functions. Aside from selling agricultural products and daily necessities, Center Market is considered as one of the hottest scenic spots where tourists can find varieties of handicraft artworks. For those who are interested in history and culture, the National Archeology Museum and History Museum are perfect choices they should never miss as they can find relevant literatures about Maya culture in the museums, in which many precious items of history are housed. 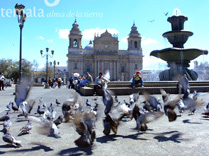 Located at an altitude of approximately 2030 meters above the sea level, Chichicastenango seems to be an isolated but a plateau city filled with religious and mysterious features, and the city has become one of the important tourism hubs well equipped with comprehensive board and lodging and transportation facilities. Besides, holiday market with various folk artworks, precious stones, and jade sold also draw masses of tourists to pay a visit. On the other hand, church in the tribe has not only held catholic religious rituals, but also inherited the sacrifice offerings ceremony Maya civilization. Paying a visit to Church of Santo Tomas will lead you to experience different religious features. 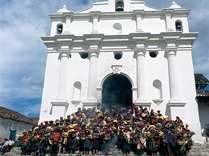 Lake Atitlán surrounded by volcanoes such as Tolimán, Atitlán, and San Pedro is undoubtedly the most gorgeous natural wonder in the area. The lake was formed in the wake of the drastic volcano movements thousands of years ago, and there are simply board and lodging facilities at the nearby small tribe. The small church, concourse, and traditional market in the tribe are also characterized with their distinctive styles. San There is one natural hot spring nearby San Antonio in the vicinity to the lake area that has attracted many spring lovers to pay a visit. 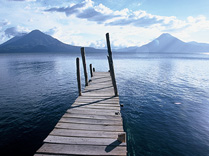 Located at the central area of Peten Plain where Maya used to inhabit, Tikal was once the center of religion, commerce, and administrative for Maya from 250 to 900 AD when the Maya always traveled across the tropic rain forest to the city to engage in various kinds of activities. As of date, the central concourse for offering sacrifice is still preserved in Tikal. In its prime, the pyramid temples at the concourse amounted to more than 3,000, and the imperial palace and residence of nobility situate between each temple. At the platform in front of the temple, there stand rows of monuments and stone plaques extolling the achievements of kings of Tikal. The prosperous activity center suddenly faded in 10 A.D, and was only rediscovered at the end of 19th century and early 20th century. Among many of the Maya relics housed in Tikal Museum, there are items such as pottery containers, sculptures, jade accessories, and animal skeletons. 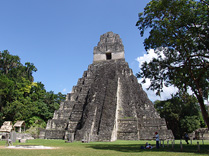 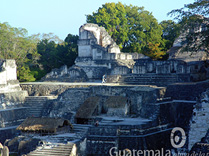